LOS ANGELES (JANUARY 17, 2020) – Bet Tzedek announced today that its Board of Directors has selected attorney Diego Cartagena as its new President & Chief Executive Officer. The Los Angeles-based organization is an internationally-acclaimed force in poverty law and advocacy. Cartagena’s appointment concludes a comprehensive, four-month, nationwide search. Cartagena succeeds Jessie Kornberg, who will become the next President & CEO of the Skirball Cultural Center in July 2020.

Only the eighth person to oversee Bet Tzedek in its 46-year history, Cartagena will be the first person of color to lead the organization. He has been with Bet Tzedek since 2012, first serving as Director of Pro Bono Programs and then as Vice President Legal Programs. A graduate of UCLA School of Law, Cartagena has dedicated his entire legal career to public interest law, including an Equal Justice Works Fellowship at the Los Angeles Center for Law & Justice and leadership of the pro bono programs at The Alliance for Children’s Rights.

Cartagena is widely recognized as a national leader in legal service delivery model design. At Bet Tzedek, this work has included the launch of Bet Tzedek’s Small Business Legal Academies and the Rapid Response: Family Preparedness Project, which served more than 20,000 undocumented parents facing threats of deportation in 2017. This work garnered Bet Tzedek the Judicial Council of California’s Distinguished Service Award, marking the first time in 25 years that the award was bestowed on a recipient from outside the judiciary.

Meryl Chae, chair of Bet Tzedek’s Board of Directors and partner at Skadden, Arps, Slate, Meagher & Flom LLP, said: “We conducted a nation-wide search that reached over 800 individuals to discover something that will come as no surprise to anyone who knows Diego: the best, next leader for Bet Tzedek was already an integral part of our organization. A tireless force for good in our city and our world, Diego will be a terrific new leader for Bet Tzedek. He brings a true passion to help those who need it most – and the skills required to get things done. We are beyond thrilled to welcome him as our new CEO.

“Diego brings a unique combination of sterling credentials and meaningful lived experience to this role. We know how lucky we are to have had him on the team all these years. We are luckier still that he is willing to lead us now.”

Cartagena will manage Bet Tzedek’s 90-person staff and will also guide the work of the organization’s 1,600 volunteers and pro bono attorneys, who contribute 60,000 hours each year to Bet Tzedek clients.

Cartagena said: “As an immigrant myself, I could not be prouder to lead an organization which is founded upon the Jewish value of welcoming the stranger and providing for the poor. To me, Bet Tzedek’s core principle ‘Justice, justice you shall pursue’ means that the work of justice is not just the work of judges or lawyers: it is all of our collective responsibilities. It means standing with and working among the communities we serve, from Holocaust survivors whose dignity, health and well-being we help preserve to the abused abandoned and neglected immigrant children whose future we help to build.”

“I am deeply humbled to be trusted with this important role during a moment at which so much is at stake. Our city, our state, our country and our world face major challenges that have rarely been seen before. Working to tackle them as the head of an organization committed to forging the right path and firmly rooted in the Jewish culture, history and tradition of doing so is both an energizing challenge and a tremendous honor.”

Outgoing President & CEO Jessie Kornberg applauded the Board’s decision, saying, “I have had the pleasure of working with Diego Cartagena for the last five and a half years.

Diego is a builder, developing many of our flagship programs and nurturing our most important community partnerships. I am confident that under his leadership, Bet Tzedek will continue to respond to our community’s most urgent legal needs and innovate new solutions to the systemic challenges our client communities routinely face.”

Community partners have also welcomed Bet Tzedek’s decision to appoint Cartagena. Antonia Hernández, President and CEO of the California Community Foundation, said, “Californians depend on the strength of our legal service providers to ensure fairness in access to justice. Nowhere is the need better served than Bet Tzedek. I congratulate Diego Cartagena and Bet Tzedek on this next chapter in their growth and look forward to our continued collaboration.”

Marvin Schotland, President & CEO of the Jewish Community Foundation of Los Angeles, added, “The Foundation and our donors have had a long and supportive relationship with Bet Tzedek since its very beginning almost 50 years ago. We know the organization will thrive under Diego’s exciting new leadership and continue to build on the vision of those who came before him. We wish him and Bet Tzedek much success and look forward to continuing our partnership for years to come.” 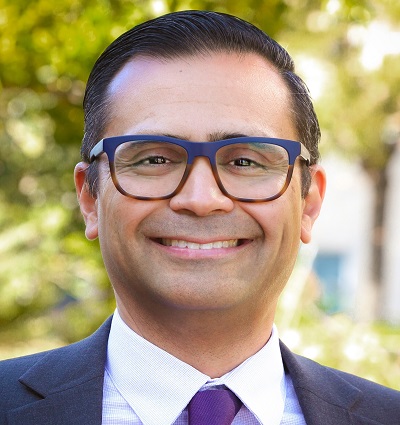 Diego Cartagena has focused his entire legal career on addressing issues of access to justice. As a former Equal Justice Works Fellow and Teen Advocate with The Los Angeles Center for Law and Justice’s Teen LA Project, Diego helped give low-income teen mothers and fathers a voice in court by providing them with legal advocacy and outreach in the areas of family and immigration law. Diego then went on to serve as Pro Bono Director for The Alliance for Children’s Rights, while simultaneously serving as the agency’s Probate Legal Guardianship Program Director.

Diego is a “Double Bruin,” having received his BA in American Literature and Culture from the University of California, Los Angeles (UCLA) and his J.D. from UCLA’s School of Law, where he concentrated on Critical Race Studies.

Diego currently serves as a board member of OneJustice. In 2019, he delivered the opening remarks at the 2019 Equal Justice Works annual fellowship convening and was a panelist at the USC Real Estate Law and Pro Bono Forum, NLADA/ABA Equal Justice Conference. In 2017, he delivered the keynote at the O’Melveny & Myers Warren Christopher Scholarship Awards, a scholarship program that honors that law firm’s senior partner Warren Christopher by recognizing rising academic stars in low-income and minority communities with college scholarships.

In 1974, a small group of lawyers, rabbis, and community activists came together to assist aging, low-income residents who were being displaced from their homes as their neighborhoods gentrified. The group individually contributed $5 per month to rent a small storefront where, one night a week, they offered free legal assistance to the community. They named the organization Bet Tzedek – Hebrew for “House of Justice” – after a central precept of Jewish law and tradition: “Tzedek, tzedek, tirdof” – “Justice, justice you shall pursue.”

Through the decades, Bet Tzedek has continued its work to close the justice gap for low- income community members, with a growing reputation and expertise in elder law, employment rights, and rapid response programs to meet emerging needs.

Today, Bet Tzedek is an internationally-recognized force in poverty law. Harnessing an award-winning pro bono model of service, Bet Tzedek has provided expert legal assistance to more than 500,000 people. Bet Tzedek’s mission is to provide free legal services to those who need them most, helping people of all communities and generations secure life’s necessities.

Bet Tzedek’s pro bono programs are central to the delivery of services – and have received awards from the California State Bar Association, the American Bar Association, the National Law Journal, the Association of Corporate Counsel and the Pro Bono Institute. Last year, 1,200 attorneys, law clerks, and paralegals volunteered, performing a substantial portion of the legal work for clients. Bet Tzedek’s Holocaust Survivors Justice Network, a collaboration of more than 100 law firms, corporate counsel offices, and social service agencies nationwide, is one of the largest pro bono efforts in U.S. history.